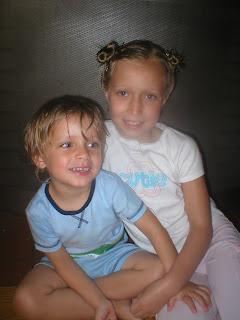 Well, we've finally been initiated into the world of lice. I have to say, we’ve been fairly lucky – three kids and this is our first infestation.

I picked up Chayton from his camp around 3pm – once they found them; I had to get him right away. I then called camp and had the girls checked out. Boy was I hoping that Nazeriah wouldn’t have any (yikes, combing out her hair???) and Kaija had a sleep-over to go to, so was really hoping it wouldn’t be her.

Of course, Kaija has them, too. (Check out their olive oil hair-dos.)

She was so upset, not only was it her late night at camp but she was having a sleep-over with her BFF (since they were 18 months old). Sigh. Camp handled it great – giving her a camp hat to cover her head (and putting it up in a pony-tail) and reassuring her that it would really be okay.

I think Nazeriah is relieved that she is spared, but I also think she wishes she had them … never one to be left out of the “hot” thing! But she is off to camp today, yea!

Chayton and Kaija have been shampooed, picked through, olive-oiled up and this morning picked through again. I really don’t know what I am doing – so hope I’m doing something right! Have to say the olive oil made it much easier to go through their hair – in case you are wondering, it’s a great conditioner and gets tangles out.
Posted by Unknown at 9:35 AM