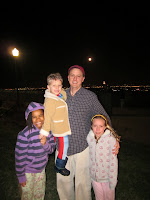 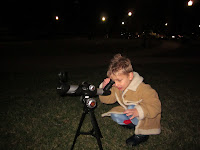 Tonight was a Moon Party. We all went out to the Reservation to see the Super Moon.  Chayton was so excited to take his telescope that he received for Christmas. I'm not so sure that he actually saw anything through it, but the night sky was clear and we all saw the moon.
Posted by Unknown at 8:46 PM No comments: 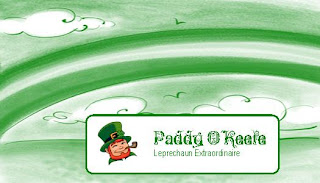 So do they? Normally on the eve of St. Patrick’s Day, or at least the last three of them, we are visited by a Leprechaun who leaves a little gift. But let me back up a bit …

Way back in kindergarten, we had an amazing teacher. Not only was she smart and respectful, but she was imaginative and fun. When the heat was turned on for the winter (old steam heat radiators) she had the class believe that there was a leprechaun that lived in the heater. That was why there were so many clicks, pings, and bumps coming out of the radiator.

Not only did the class have the sounds of the leprechaun, but they also had the mischievousness of it. When the class would leave for one of their specials (art, music, gym, etc) “the leprechaun” would play pranks: crayons missing from all of the boxes, erasers left in weird places, chairs turned upside down. And of course anything green had a good chance of disappearing – since the leprechaun LOVED green things.

It all led into St. Patrick’s Day, when the class had to devise a “trap” to catch the leprechaun. So these cute kindergartners worked together to come up with a plan to catch him and then executed it. It was a masterful array of boxes, green treats, string, fabric and lots of kid ingenuity. But alas, the leprechaun slipped away … not before leaving a small green treat on everyone’s desk.

Since that time, we have had a leprechaun at home – we also have steam radiators. And the leprechaun takes away some of the scariness of the noises at night for a little mind. Our leprechaun doesn’t cause mischief, but does leave a little “something” for each child to discover when they wake up on St. Paddy’s Day. And of course, he leaves a trail of shamrocks (i.e. shamrock confetti) where he has been.

This year, the oldest of the nine year-olds asked on St. Paddy’s Eve, “What is the leprechaun’s name?” The two girls solved the mystery by leaving notes for the leprechaun that included (amongst cute drawings and other sayings) “What is your name? Leave it here _____________.”

So, for the first time our leprechaun left his business card. And I imagine our kids are going to keep that card forever.

Now this is breakfast

Chocolate Gravy and biscuits ... um hmm good! We just ate this Southern staple for breakfast this morning and the littlest one already started calling us "ya'll."

Find the recipe I used here: http://southernlady64.wordpress.com/2011/02/27/chocolate-gravy-and-biscuits/
Posted by Unknown at 11:20 AM No comments: