Friday we leave Cairns at a time too early to mention and arrived at the Auckland airport in time for dinner. On the map it seems so close to Australia ...

Our friend Andrew was waiting for us outside of customs with a ballon and flowers - I had forgotten how much I enjoy arriving to a friendly face! Andrew was such a nice host - he devoted his whole weekend to squiring around the Allen family. We were direct beneficiaries of his past employment with the New Zealand Tourism Association.

After taking us to our YHA hostel so we could check in and drop off our luggage, he then gave a quick driving tour that ended up at the Fish Pot - one of the best places for locals to get fish and chips and L&P to drink. Nazeriah was in heaven. She's wanted fish and chips since we got to Australia. And they were delectable (in Nazeriah's words). It was take-out, so we took it and sat next to the water. Almost everywhere you go in Aukland it seems that you are only a hop, skip or jump away from the water. As if dinner wasn't enough, we than stopped by this amazing ice cream shop for ... You guessed it ... Ice cream.

Andrew explained to us that New Zealand is a huge exporter of dairy products and how they are able to do it is that the milk is dehydrated and packaged for shipping. The reason I'm going into this is because this is why Andrew claims the ice cream (and all dairy products) taste better in New Zealand. The once re-hydrated, the milk is so much more creamer than regular milk - it makes everything that much yummier. Plus the cows are grass-fed.

After a little more conversation it was time to take the Allen Clan back to their beds - we were getting a little fried.

On Saturday Andrew picked us up again and took us to the Auckland War Museum - which is a museum of much more than just war.Amazing exhibits on Polynesian and Maori culture - plus an completely awe-inspiring exhibit on Wonders of Wearable Art (WOW); I want to see the next presentation of all the costumes in competition for WOW).

Next was grabbing lunch from a corner bakery (Courtney had a steak and cheese pie; I had steak and mushroom). Then we stopped to eat our lunch at a park next to One Tree Hill. The kids played on the playground with Chayton doing the very fast zip line. What was interesting was how they let the cows and sheep out loose on the grassy areas around the park - lots of poop in the yard!

Next up was The Aquaducts. A neat shopping and restaurant area near the port. There was a small street market going on and we tried to climb the outside stairs of a really tall silo - but the kids were all too young. It was a Mexican restaurant in the city for dinner - a crowd pleaser.

Sunday was a volcanic island - Rangitoto. Formed only 600 hundred years ago - it was the last and largest volcano to be formed in the Auckland volcanic field. Supposedly the Maori from the neighboring island came onto Rangitoto while it was cooling off - their is supposed to be a human footprint forever left in the black lava rocks. You can still see the black volcanic rock all over the place. Some areas it will be overgrown with grass and trees, then all of a sudden it is just black volcanic rock. We walked all the way to the crater where we had our sandwiches for lunch.

After hitching a ride with a harbour cruise ship (we came over on a normal ferry boat) we headed back to mainland Auckland; complete with commentary from the harbour cruise. Andrew dropped us off on Queen Street so we could check out the Outside Art Fair and Exhibition - we just made it before it closed down. But the kids were still able to paint flags for one of the live art exhibits. All the painted flags were strung and hung up around the grounds like Tibetan Prayer Flags. It really looked cool.

Next up was a quick visit to the Whitcauls book store where we found level appropriate workbooks for the kids. We are unsure of the amount of Internet connection we will have while we RV the North and South Island. No Internet means no "school" - but now we have workbooks!

Dinner was at an AMAZING authentic Thai restaurant. It was so tasty! The kids were so excited - we ate out more this weekend than we have the past three months! what a treat.

The sad part was saying goodbye to Andrew as he had to work on Monday and we were heading to Whangarei in our RV. 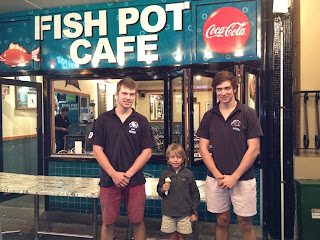 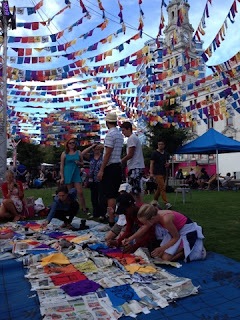