I just woke up from a long winter's nap and it's 11:09pm Thursday night - Sydney, Australia time. Loosing a day really does mess up your body's sense of time.

Chayton and I collapsed around 2:00pm Sydney time - and he's still asleep. Courtney and the girls just fell asleep about an hour ago - the travel warriors!

Poor Chayton, tho. He was ready to take in the sights of Darling Harbour and whatever other tricks we had up our sleeve. But ...

Right after taking the photo (standing on the squares in the water), Courtney and I start walking and leave the kids to catch up with us. Quite okay with a little bit of water play. Both of us thinking "It's okay to give them a few moments playing in the sun - we don't have to watch them like hawks ALL the time."

Then what do we hear? Kaija screaming for us and Chayton hysterical and head-to-toe wet. He slipped. Fell in. Hit a very sensitive part on one of the water systems parts that was hidden under the water.

He's a trooper, tho. Courtney took him to the restroom - wrung out his clothes and dried them as much as he could with the hand dryer. Couple of tears later we made it to the park at Darling Harbour and he was off on the zip line. (Ok, it was more than just a few tears and he did have an interesting gait for a little while). He's an amazingly resilient kid.

But, little things kept happening to him. Like biting his finger while eating lunch and almost running into a wall or two. After that, we decided it was time to get him into bed. 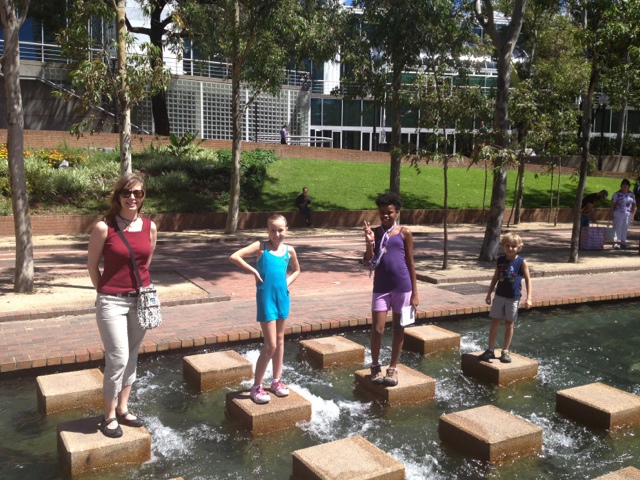 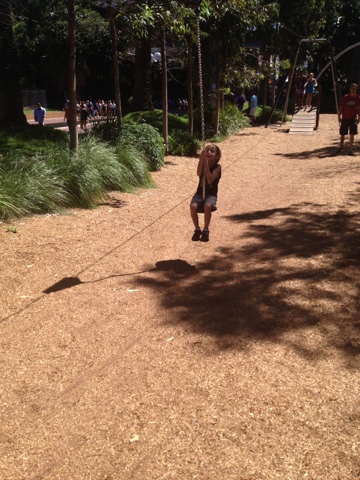