We picked up the RV today! After getting exceptional customer service in a very timely manner for everything else that we've done in New Zealand so far, we were surprised at how inefficient this process was. It took forever. But the weather was beautiful, so sitting outside while waiting wasn't too bad. The kids were so excited - running back and forth between sitting with the luggage and checking on Courtney in line.

After getting the rundown on the RV (I swear I was listening and it all made sense when she said it ... it just seems so different when trying to do it by myself), we slowly drove out of the depot and headed over to the nearest grocery to pick up lunch and dinner.

Courtney gets major huge points on this trip - not only is he driving a 6-passenger RV - it is a manual transmission AND the shifter is on the left-side (since this is like Australia and you drive on the left-side of the road). Everything is backwards - the wipers are where the turn signal usually is and vice versa.

Next up was making it to Whengarei (the "wh" is pronounced like an "f" sound). This took us about 4 hours - we ended up on the coastal highway for most of the time - which was beautiful, but it had more round-a-bouts and stops than the main highway does.

In Whengarei we went full grocery shopping at the Pak N Sav. Which looks like a small Costco on the inside, but you buy in grocery store sizes. I love going into all the different grocery stores! After picking up supplies we were off to find a campsite. Lucky for us the first one that we picked had space - Top Ten Campground Whengarei. It was beautiful. Clean bathrooms and kitchen, a trampoline right next to our site and a two minute walk to a playground. Plus, surrounded by beautiful scenery.

The next day Courtney and I relaxed while planning out our adventures through out first through Rotorua (which took longer than we thought)while the kids jumped on the trampoline and ran around. Chayton made friends with two boys from Switzerland and spent the rest of the day playing with them.

Kaija found information on an interesting place called The Kiwi Center, so we headed over to take a look on Wednesday. It's a nice little complex not far out of town: bird rehab center, an animal display area that you can view their two Kiwis and other lizards, museum, planetarium (which was closed), gift shop and bathrooms (which we visited about a million times).

The Kiwis were so cute! I was hoping that we'd get the chance to touch them. But they are actually really fragile, so no touchy. Their ribcage is not quite fully formed, as in doesn't cover their internal organs all the way and the bones are not that strong. This means that pretty much any touch to their chest will cause internal damage that will lead to death. Ouch. Hard way to live. But, if you think about it, there aren't any natural predators on New Zealand. So up until the time of the Europeans arriving, there wasn't an animal that would bother the Kiwi. But with the Europeans came rats, ferrets and dogs. And their went the Kiwi population.

The female Kiwi is the bigger of the two, with a VERY long, skinny beak. The males beak is also long - but not as long as the females. The beak is actually an extension of their skull! They have great smell and can also sense vibrations to help them find food. We were able to see a feeding, so got some great views of the birds.

We also had a Tui talk to us. In the rehab center there is an adult Tui we likes to whistle "Pop Goes The Weasel," ask for a kiss along with a couple of smoochy sounds, and say "come closer, quick, hurry." We were all quite entertained and had him going for about 20 minutes or so.

Next up was a quick walk around the CBD (Central Business District). First up was a stop at a DVD rental store. It was having s going out of business sale, and since we have a TV and DVD player in the RV, we picked up a couple of movies for the kids to watch while driving. Next it was onto Whitcauls book store and then a nice turn at the Hospice Charity (Thrift) Store. I could have outfitted a new wardrobe! But with our luggage space begin so tight, all I did was look.

There is a whole host of things to do in Whenagei, we could have stayed a lot longer. But we needed to head to our next stop - Paiahia. 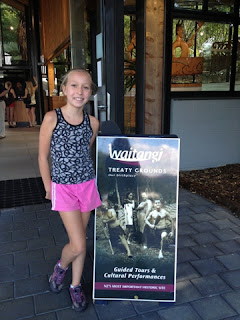 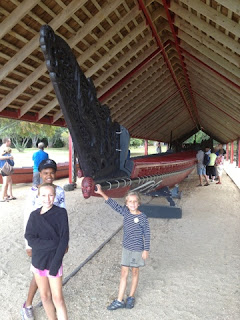 Ceremonial Waka (War Conoe) that was built for the centenial celebration. It fits 150 warriors (and it is actually used).
Posted by Unknown at 2:00 AM