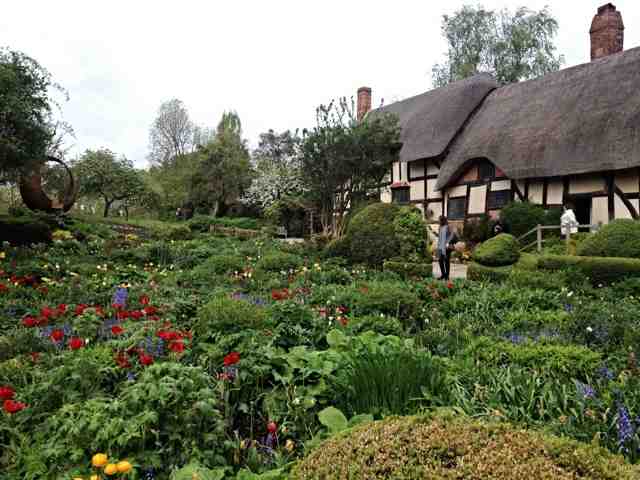 Anne's Cottage was only a two-room thing when she lived there. But now it is a two story house with lush gardens. I wonder how much was really there way back then.
We had an amazing docent in the two rooms telling us all sort of stories and taking the time to answer all our questions after our group had left.  I think he liked the extra attention and enquiries from our children. 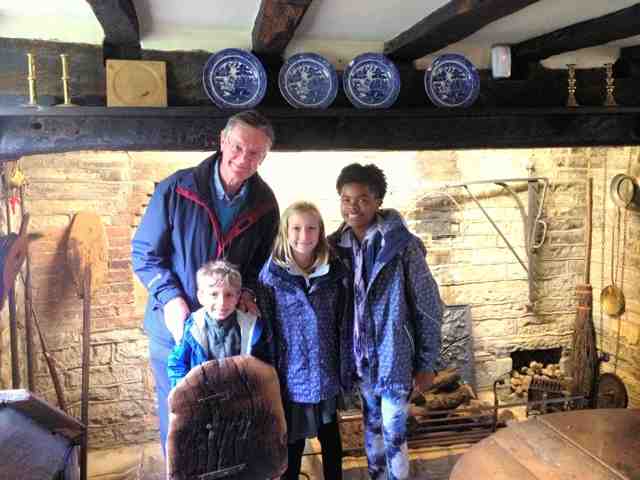 I loved learning about how they cooked and being able to see what they actually used. We learned a few things, too. Like "Under Your Thumb." A wife wasn't allowed to let the fire go out, if she did her husband could beat her. But only with a piece of wood no wider than his thumb - hence she was under his thumb. Don't think that would work  nowadays. Curfews were also set because that meant that it was time to cover your fire. Each night everyone had to cover their fire so that the roof wouldn't catch fire while they slept. The bells would ring to remind you to go home and take care of business.  I have no idea what the word is, but supposedly curfew is from the French meaning to cover your fire. Then in the morning the bells would ring to let you know that you could stoke your fire up again (and get cooking for your husband I suppose). We saw the old fashion spit next to the firer that the youngest child would get to turn for hours on end. And they had parts of the next generation spit that used weights/counterweights and a pully system so you only had to set up the pully and leave it alone. Did you know the English had pizza ovens? Too bad they only thought of cooking bread in them. :-)
In the gardens there was a singing tree that Chayton actually "fixed", okay, turned the switch on to get it to sing. It was a tree that had metal mesh all around it. You were supposed to touch the mesh and this ethereal music would start. Once Chayton figured it out, it did do that.
There was a couple of walks in the woods that we took. On the first one we were met by Bubbles the cat who walked with us and showed us all around the Woodland Walk. 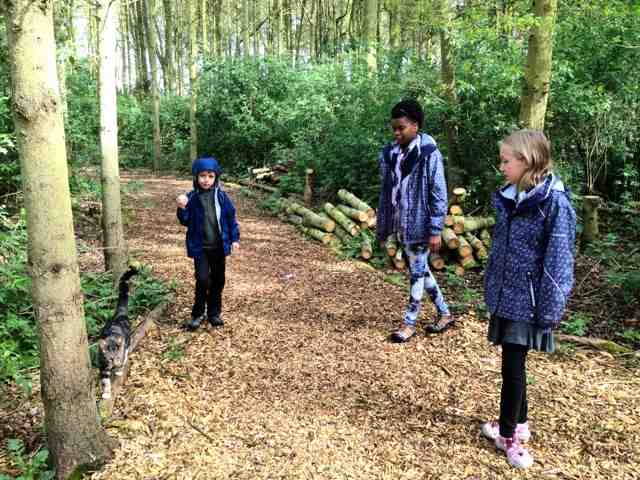 We actually ended up spending two days at Mary's Farm. It started to rain too hard the first day and we promised the children that we would come back.
Mary Arden's Farm was quite large and it is still a working farm, albiet a tourist and educational working farm, today. There are many pastures, cows, a hairy pig, regular pigs, sheep, plus crops, a falconery and an apothecary garden.
We were able to meet Izzy the Snow Owl (Barn Owl, Ghost Owl, Love Owl). The falconer has raised Izzy since he was a few weeks old - he is only 10 months. Snow Owls are called Ghost Owls because when they fly you do not hear their wings at all. Izzy would fly right by your ears and it would be perfectly quiet. Chayton was thrilled - he was able to have Izzy land on his arm twice. Nazeriah even voluteered to have Izzy land on her! I was quite suprised and impressed. Kaija was too afraid of the crowd around us to give it a try. 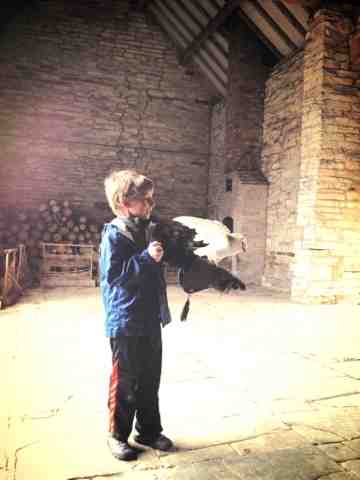 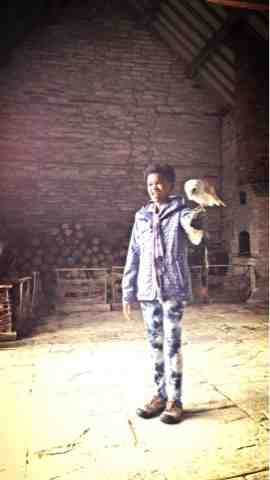 Kaija and I loved petting the baby cow and sheep. Nazeriah didn't really want to get close to them; Chayton was up for a little bit of everything. I loved the apothecary room and the apothecary gardens (I have been getting lots of ideas for my next gardens). 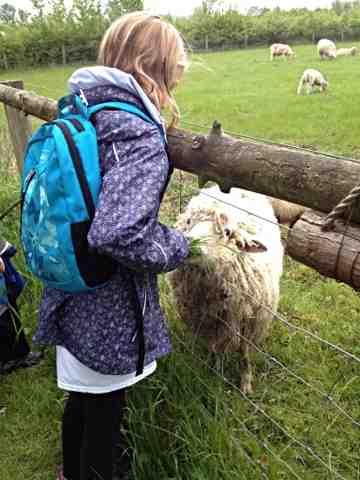 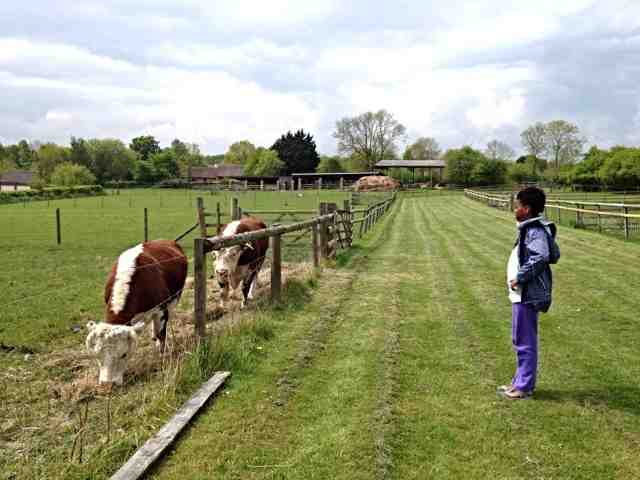 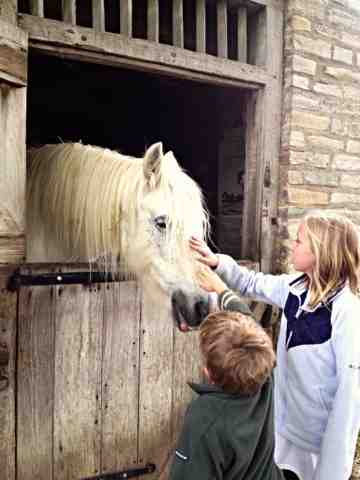 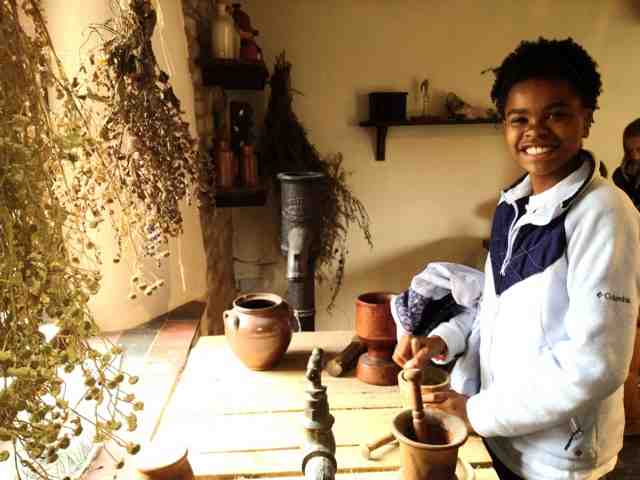 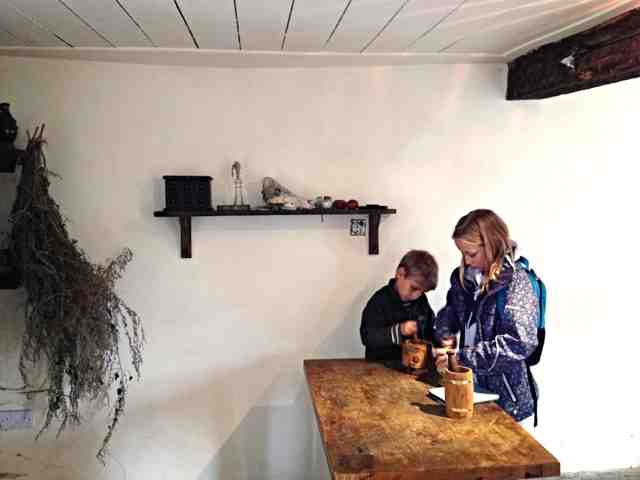