Today Chayton lost his tooth! It's been really wiggly for the last few days, but hanging on. Chayton is quite keen to use his new travel tooth pillow that Auntie Alisa made with him. 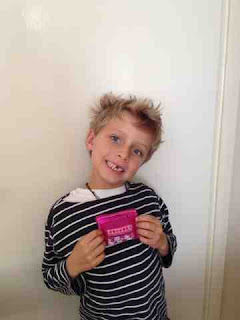 After all that excitement passed it was time to head into town. First up - heading back to Kings Cross to see Platform 9 3/4. What fun! The guides there did a nice job, too. Talking with everyone, handing out the correct House scarf for you to wear, and helping out with a bit of magic to make it look like you were "running" into Platform 9 3/4 (that is flipping up your scarf for your photo). 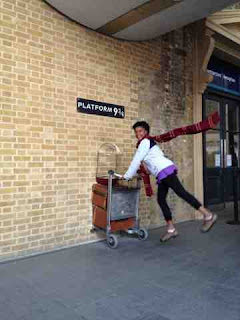 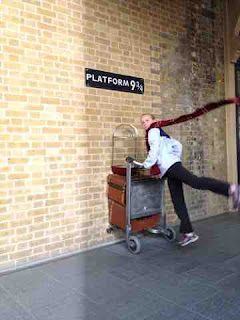 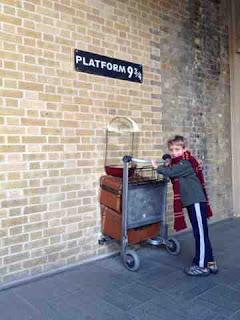 Then it was on to Paddington Station to take the train to Windsor. On the first train the children had their own section with a table. Courtney and I were lucky enough to sit together. But don't worry, each child came back at least once to "visit" with us. 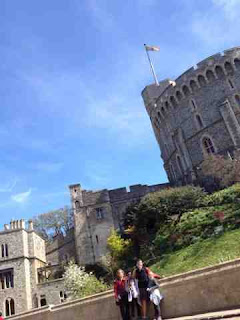 As a weekend palace, Windsor Castle is pretty amazing. The girls swore that the queen was in residence because the correct flag was flying. I'm not totally sure it was, but we did peek through the gates to the Royal Family's quarters. At one point i even saw two men hanging out on one of the balconies ... wonder who?

The girls and I got to see the guards marching past us and through the Royal Family's private area. Then by chance (when we went to collect Chayton and Courtney from the public toilet) the guards marched past us again! Chayton thought they were pretty cool. I have to say, seeing them marching with modern machine guns in a traditional old-style uniform is a bit of juxtapositioning. 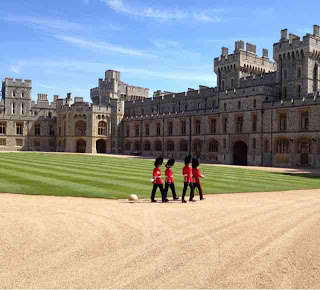 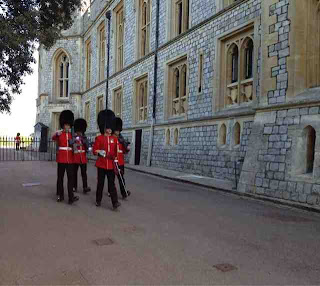 After that, Chayton and Kaija tried on a bearskin hat in the gift shop. 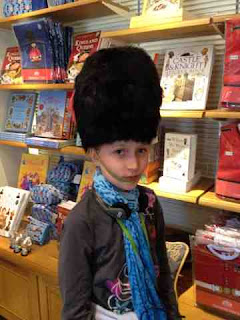 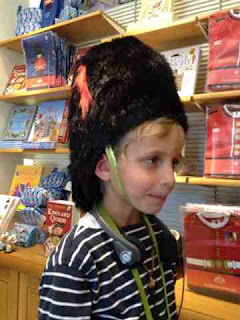 I really loved looking at the garden in the moat (which was never filled with water - even when it was first built; seems like a lot of work for a garden). Kaija enjoyed seeing the "dollhouse" that was a present for Queen Mary. It was altogether a beautiful day. 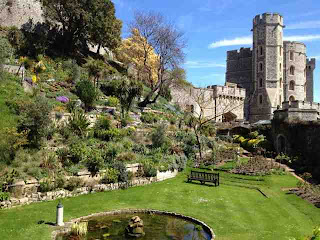 On our walk back through town to get to the train station, we stopped at an old-fashioned candy shop. The children all got to pick out a couple of pieces of candy for our "Tooth Party" to celebrate Chayton loosing his tooth. As we waited for the train, we dug into the sweets (Mommy and Daddy also celebrated!). 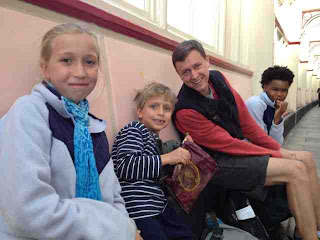 We caught the train (it's a "shuttle" and only goes back and forth to Windsor) and at our stop for the London train we saw that there was a grocery store within short walking distance from the train station.  We've had trouble finding a full-fledged grocery to do our shopping, having to use an "express" close to our flat. So Courtney talked the station attendant into letting us leave the station to go shopping and come back in without having to pay for another ticket. So off we go to Tesco!

This was more than just a grocery - it was a super supermarket! Unfortunately, we didn't have that much time to look at everything - just got what we needed. Everyone had to carry grocery bags back to the train and then we joined the commuter traffic to get back to London.

It was so crowded, as we were waiting to get into a full jam-packed car, Courtney questioned the train conductor about the carriages in front - we thought they were first class, but if not we were going to jump the crowds and go sit there. I'm not sure if we looked tired and harried or if he was just being nice - but even though it was first class compartments he let us go sit in the car. It was such an nice ride back into Paddington Station. Then it was two more trains and a nice (ugh) walk with all of our bags to get to our flat. Chayton had to be woken up since we couldn't carry him this time. 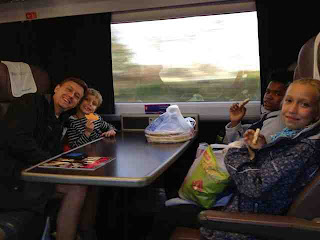 What was a real kick was when our kids showed us just how much of a comfortable traveler they are all becoming. Once we got back to the station from our grocery expedition, there came an announcement over the loudspeaker. "Due to the traffic we have added another train to the London line. It will arrive in two minutes. We apologize, but it does mean that you have to cross the tracks to Platform 1." Without a word to Courtney or I, all three kids picked up their bags and raced off to the stairs so they could cross to Platform 1 - they weren't missing that train!
Posted by Unknown at 1:09 PM