Shakespeare's Birthplace and Afternoon Tea (14 May)

Catching up on England ...

We had such a great time in London that it was sad to leave. But the idea of slowing down our crazy "Tourist Schedule" is very appealing. After going non-stop with sightseeing we are taking it down a notch or two at the Macbeth Cottage in Binton, which is very close to Stratford Upon Avon.

That leads us to our outing to Shakespeare's Birthplace. The people of the Shakespeare's Trust (and the many others that pre-dated this organization) took a location (or five) and turned them into a nice educational and entertaining outing. You don't just enter a house and look at old furniture. You do look at old furniture, but they have included very informed and delightful "docents" throughout the experience.

On this part of our Shakespeare Tour (there are five houses that you can visit), the first stop was learning about Shakespeare's father and his glove/tannery workshop. Not only did we hear how great of a glove maker he was, but there were samples of the leather in all states that we could touch and feel. The pouches that he made for people to carry their everyday items in - like their silverware. And the illegal wool that he sold on the side.  (You had to have a special permit to be able to sell wool and it was tightly controlled on who would be granted that allowance. Sort of like a liquor license in New Jersey).

Next up was the master bedroom - the original family bed. Well, not really. The baby would have a cradle and the parents would have the bed. All the other children under the age of eight or so slept in a trundle next to the bed. The parents had a mattress, the kids just had the rope supports and a straw pallet. In Shakespeare's time, it would have been him and three other children in the trundle at one time. We also learned where "sleep tight" and "don't let the bed bugs bite" came from. The bug part is pretty self-explanatory with straw mattresses. Sleep tight comes from tightening the rope supports of your bed - the tighter the ropes, the better night's sleep. The looser the ropes the saggier night's sleep. Chayton was enthrall end as we were treated to a demonstration on now to tighten the ropes.

After walking through the addition to the house, that was made by Shakespeare to open a pub in this location, it was off to the garden and live Shakespeare in the park! (He did this when he inherited the house after his father's death. Shakespeare already had purchased his own family home and didn't need to live in this one. He actually had bought the largest house in Stratford Upon Avon ...) 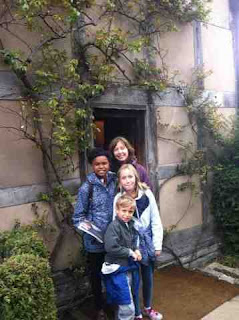 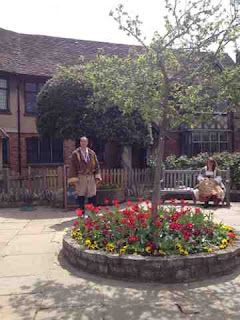 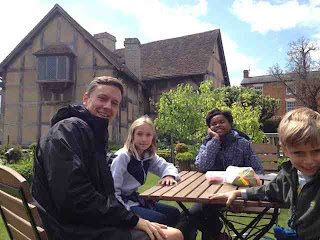 After all this sightseeing it was time to treat the kids to a real English Afternoon Tea. Not High Tea, which is what the working class would have when they came home and sat at the "high" table and would include meat like a supper. But reminiscent of the society Afternoon Tea which helped keep off the hungries between their two meals (breakfast and then dinner that happened around 8pm). It was also eaten at low tables next to settees, chairs and couches as those society ladies munched delicately while telling each other all the gossip. Okay some probably did have more intellectual conversations (I hope).

I found this cute 1940s themed restaurant appropriately called "The Fourteas." The decor was from the 1940s as well as the costumes of the waitstaff. But more importantly the tea, the finger sandwiches and the cakes were out of this world!

Our tea was brought to the table with a five minute tea timer to ensure the perfect cuppa. Chayton kept a watchful eye on it to make sure that we didn't go over the allotted time. The girls loved the sugar cubes instead of packets of sugar and enjoyed their cups of tea. Chayton opted for the apple juice which tasted freshly pressed right in the kitchen. Courtney and I enjoyed the luxury of having sugar and milk in our tea (we have become experts at drinking our tea black at home and only milk in our coffee when out; we're hoping there is something healthy about that).

The highlight came when our leftovers were boxed up. Chayton's eyes lit up when he saw the cardboard box and twine. My little imaginative recycler. (Post Script: It became a home for his tiger TJ until we left England. He was very sad about having to leave to box.) 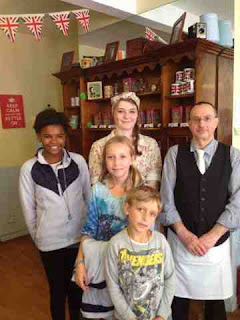 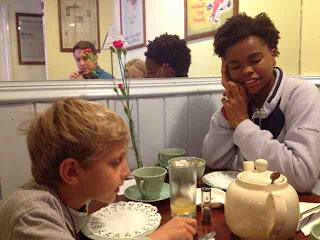 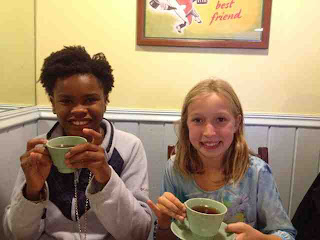 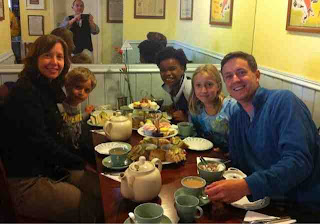 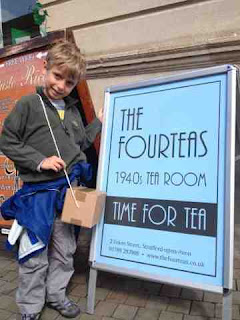