Today we took a drive to Trier, a little under two hours from Bacharach.
We finally discovered in Paris how fun the hop on-hop off buses were, so that was the first thing we signed up for! That is, after finding parking.
We parked near the Porte Nigra (Black Gate) and planned to base our day from this point. The Porte Nigra is left over from the Roman times - it one of the gated entries into the old Roman city, Augusta Treverorum. 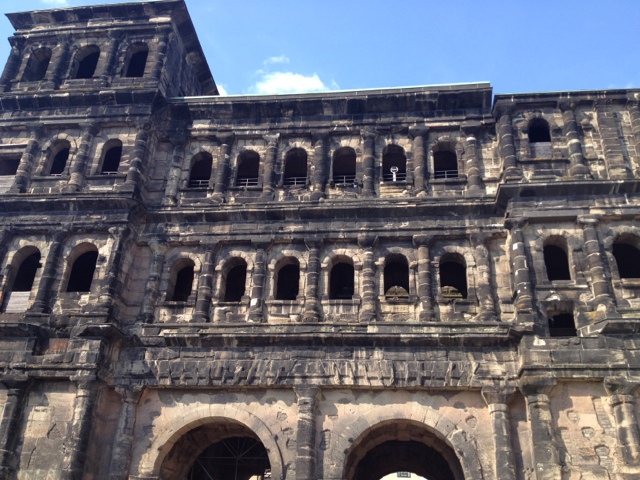 We hopped onto the bus, plugged in our ear buds and were off listening to the history of Trier while someone else drove us around (which Courtney and I really liked). First stop, the Barbarathermen (Barbara Baths).
I didn't learn too much about these - it's not a site that you can go into and walk around. You only get to walk the sidewalk that is on the outside of the fence. I'm guessing that it's still being dug out. But it was cool to try to imagine what it looked like.
Then it was a short wait for the bus, more history in our ears and off at the Amphitheater stop. This Roman Amphitheater was built between 160-200 AD. They think it could sit up to 20,000 people! Once the Romans left Trier the Amphitheater wasn't used and the stones were removed to build new structures elsewhere.
We were able to walk around the seating area, through the arena area and underneath the arena. Supposedly there was some sort of lift that was down in the cellar area that would help to bring up and down different theater sets, people or animals.
Courtney and Nazeriah put on a show of somewhat in the middle of the arena while I was sitting up on one ofthe grassy   slopes. Even though they were so far away I heard every word as clear as if I was standing right next to them. 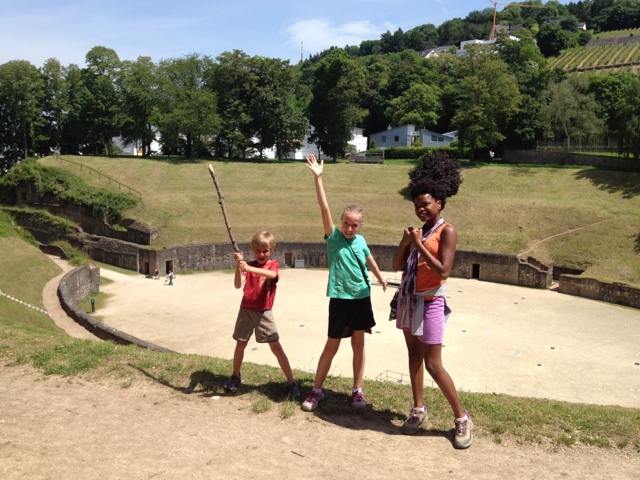 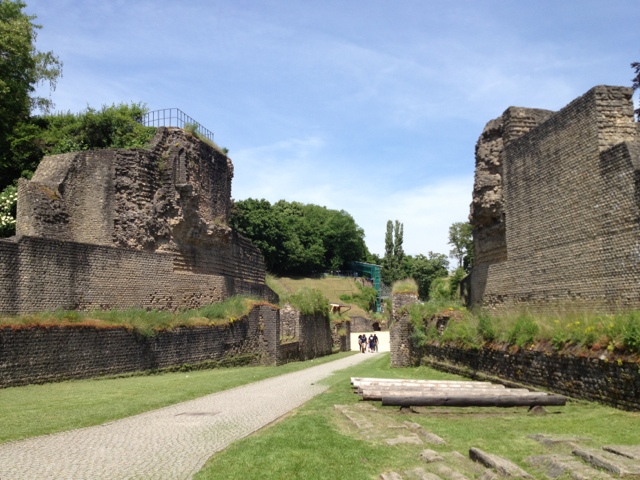 Back on the bus and over to Konstantin-Basilika (Constantine's Basilica). Which is a really large open room that Constantine built as a place to receive the common people. Although it's been a church for some time now; destroyed in WWII and completely rebuilt. The heads from statues of Jesus and four apostles are still in very good condition.
Then it was a short walk over to the Thermen am Viehmarkt (Forum Baths). What is interesting is that they were never finished. And that only because of the bombs from WWII was the site able to be excavated. 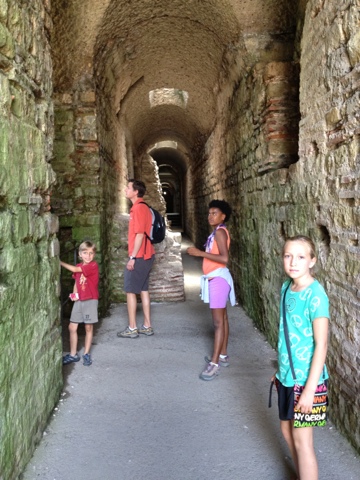 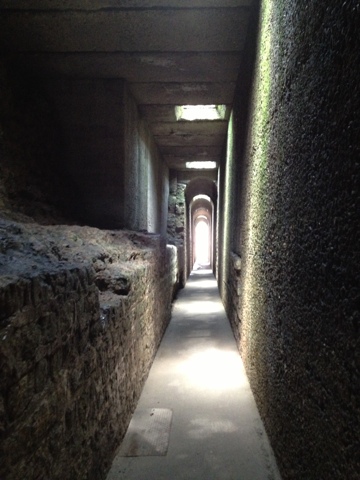 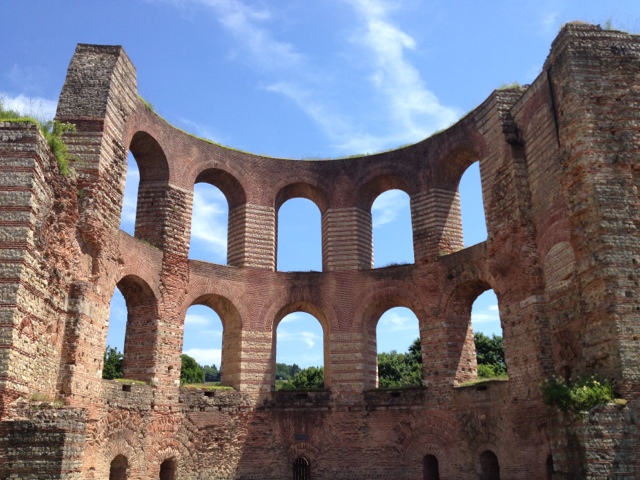 On our way over to the Baths, we stumbled upon Constantine's foot ... 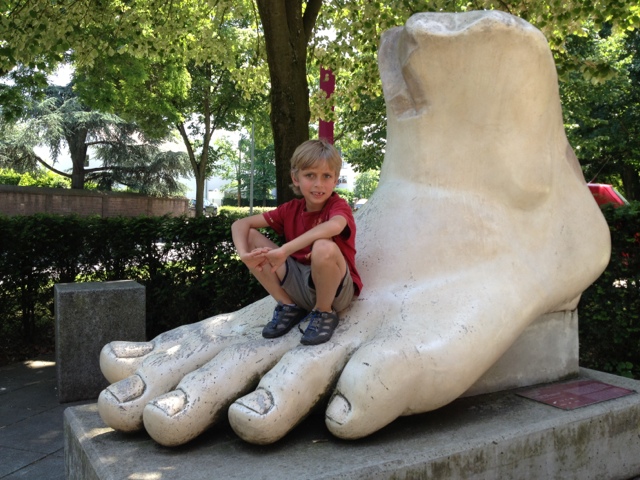 After the foot we stopped to get some ice cream and go to St. Gangolf Church. 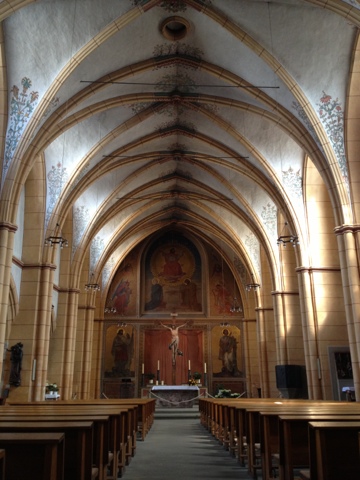 The hungries finally caught up with us and it was time for a brochen and wurst. 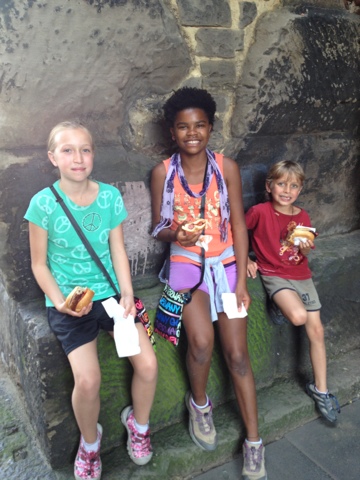 Our final stop was the Trier Cathedral and a peak into the chamber where Jesus' robe is kept. 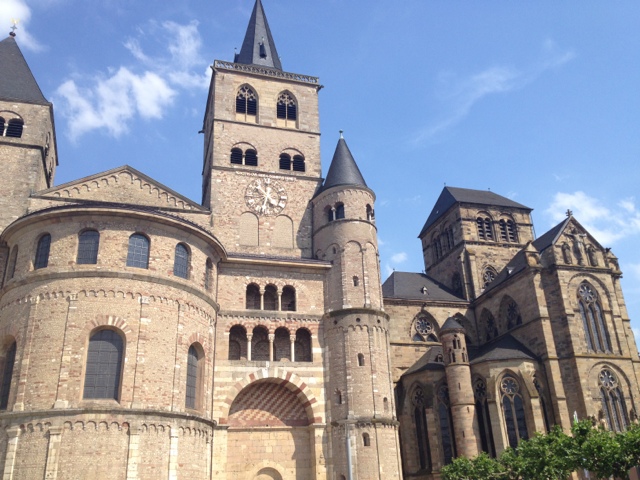 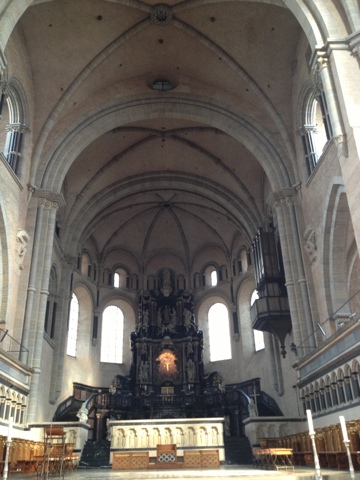 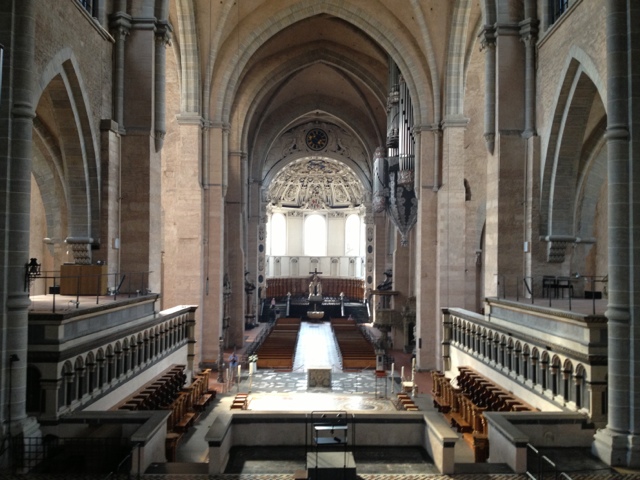