Up until today all I had thought about Athens is that it is hot, crowded and it's streets were the worst to try to pretend to be navigator of the car.
That was, until we went to the top of the Acropolis.
From there Athens stretches out before you as if it is touching the sea. The rooftops on those rather small, one-way, over-packed, without rhyme or reason streets look quaint. Quite different then what I have got used to looking at from our balcony or the steaming walks from museums, the hop on - hop off bus and other old things that we have been looking at. 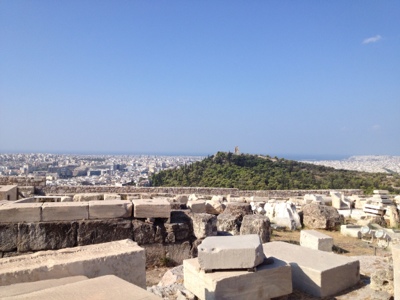 Which makes me feel much better. You see, I have always thought of Athens in the most romanticized of ways beginning with my first forays into the literature of Greek Mythology. In my mind it glowed. It pulsed with the beginnings of thought, of philosophy, of the great stories. I have to admit. For the first few days here I had been a bit disappointed.
It probably didn't help that our schedule had gotten more on the late side of things; which meant that we didn't get out of the house until eleven in the morning. And that meant we were walking around or sitting on a bus during the heat of the day. Add that I don't think I drank enough water. Add to that having children that were also hot and didn't drink enough water. And our air conditioning in the apartment is a little on the wimpy side.
But then we made it to the Acropolis. Thanks to my morning person, get up and go husband, we were out of the house by 9:00am. This made the walk to and up the Acropolis in bearable heat and without too many other tourists next to us. (Did I mention our apartment is within walking distance of the Acropolis? Even with all my complaining, that is just too cool.)
First we passed the New Acropolis Museum (which we visited yesterday), next the Theatre of Dionysus, some other old remains and then we walked through the Propylaea (which is the actual entrance to the Acropolis).
After stumbling around tour groups you finally arrive at the Parthenon. 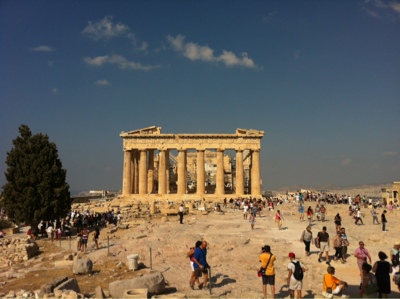 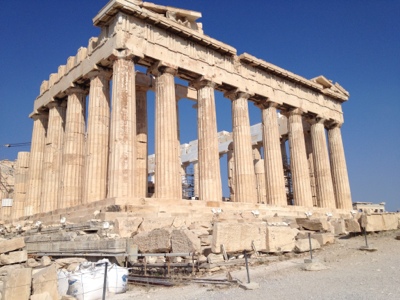 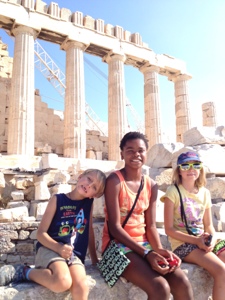 Seeing this in front of me I could really imagine just how big that missing statue of Athena (was 13 meters tall) really was. Quite amazing and awe-inspiring. Even with the crowds of people standing around there is a special feeling up there. Unfortunately you can only walk around these wonderful buildings, unlike the Temple of Zeus where we could get quite close or in the Vatican where you could actually touch some of the antiquities.
Of course Kaija and Chayton found a furry friend. 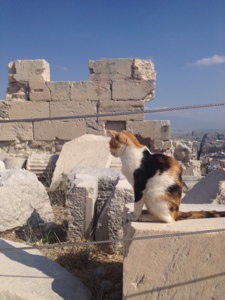 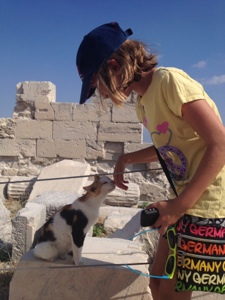 The Erechtheion (we saw the statue-columns up close in the museum): 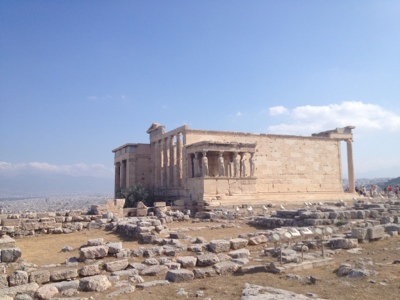 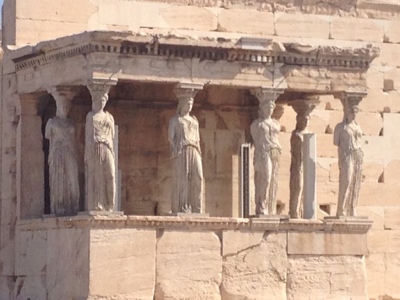 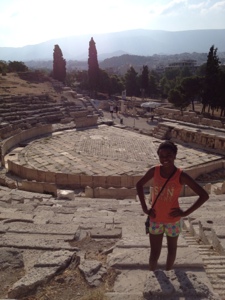 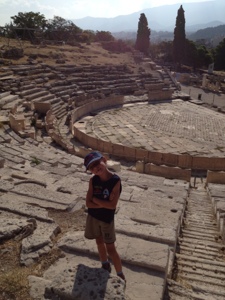 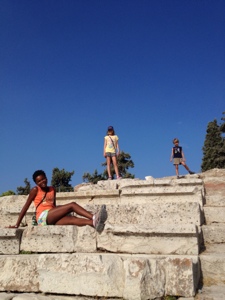 Which talking about the Temple of Zeus ... 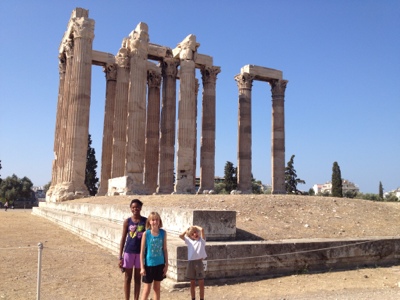 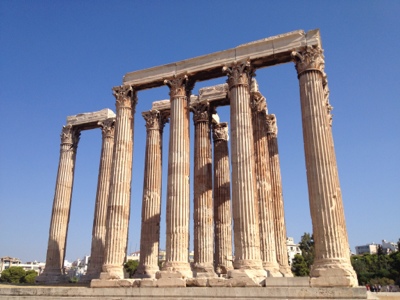 The New Acropolis Museum (which has a great Family Backpack adventure kit): 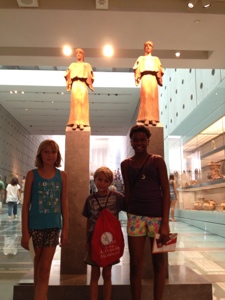 I'm glad that we went to the museum before heading to the Acropolis. At the museum you were able to get a little closer to the statues and murals. Plus you could see the relations of what the pieces actually looked like to give you a better sense of proportion. And in some cases what the statues might have looked like in their original paint colors. All of this helped in imagining what the Acropolis might have actually looked like back in the day.
We still have eight more days left in Athens until we leave for Turkey. I wonder what we'll discover next?
Posted by Melissa M. at 2:44 PM