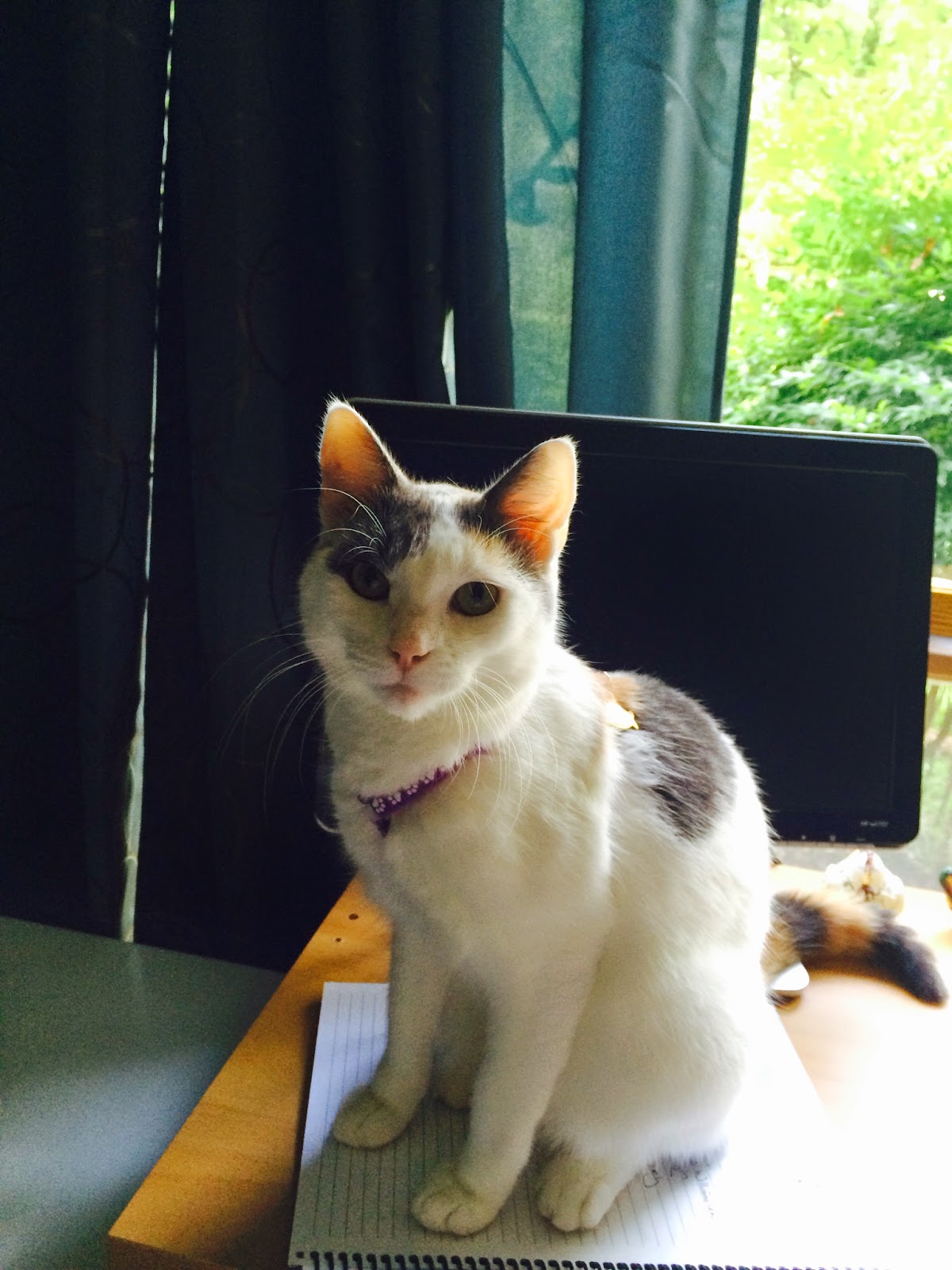 One day, the beginning of August, I was walking back to my car at Chayton's school after morning drop-off. Out from the bushes pops this cute, friendly cat.

She starts walking with me. I start petting and talking to her. She follows me over to my car - sitting a few feet away. I sit in the driver's seat with my door open, just talking to her. She just sits there. Then all of a sudden, she walks over to me and hops up into the car!

After nosing around the passenger seat and the middle row, she jumps up into my lap and settles down. At that point, I shut the car door and head home. What else would you do?

Would you believe, she stayed laying in my lap all the way home. Courtney and I agreed that I should try a few houses by the school to see if she got out and they were missing her.

(This was all discussed while Courtney was standing outside of the car and I was still sitting inside with the cat on my lap.) 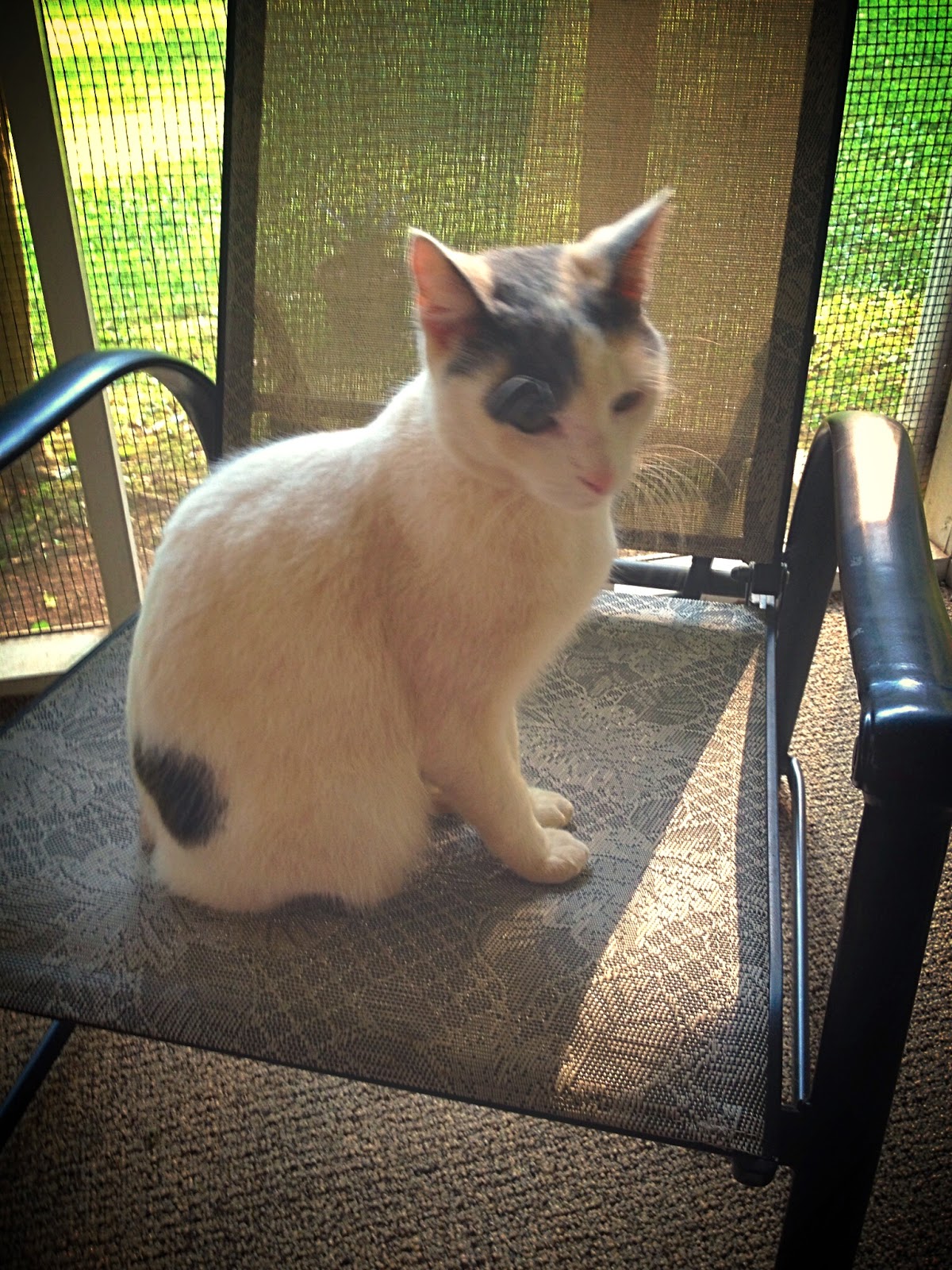 Next up, another ride back to school to check out some houses. Yup, the cat still sitting on my lap as I drove. At one house, the front door had a large window that I could look through. The little yappy dog heard the doorbell and saw me, but the woman in the house just waked right by the door as if I wasn't there. Another house, there were four cars in the driveway - but no one answered. At one house I was actually able to talk to someone - but even then, no go. So back home we go and a nice comfy rest on our screened in porch.

Now that she was settled into the porch (and seemingly quite content), it was time to call the vet. We had just had Cari and the house treated for fleas - didn't want to get any more! So after she had a quick nap and some food - time for a bath! Off she went to the vet.

After picking up the kids from school, we all headed over to the vet's to pick up the cat. All three of them were so excited. But at this point, I was really emphasizing that we were a temporary home (ha) and that there could be a family out there really missing her. We needed to do what we could to try to find that family. That included flyers up at the vet, the schools and animal control as well as a classified ad in the much-read Rome newspaper. 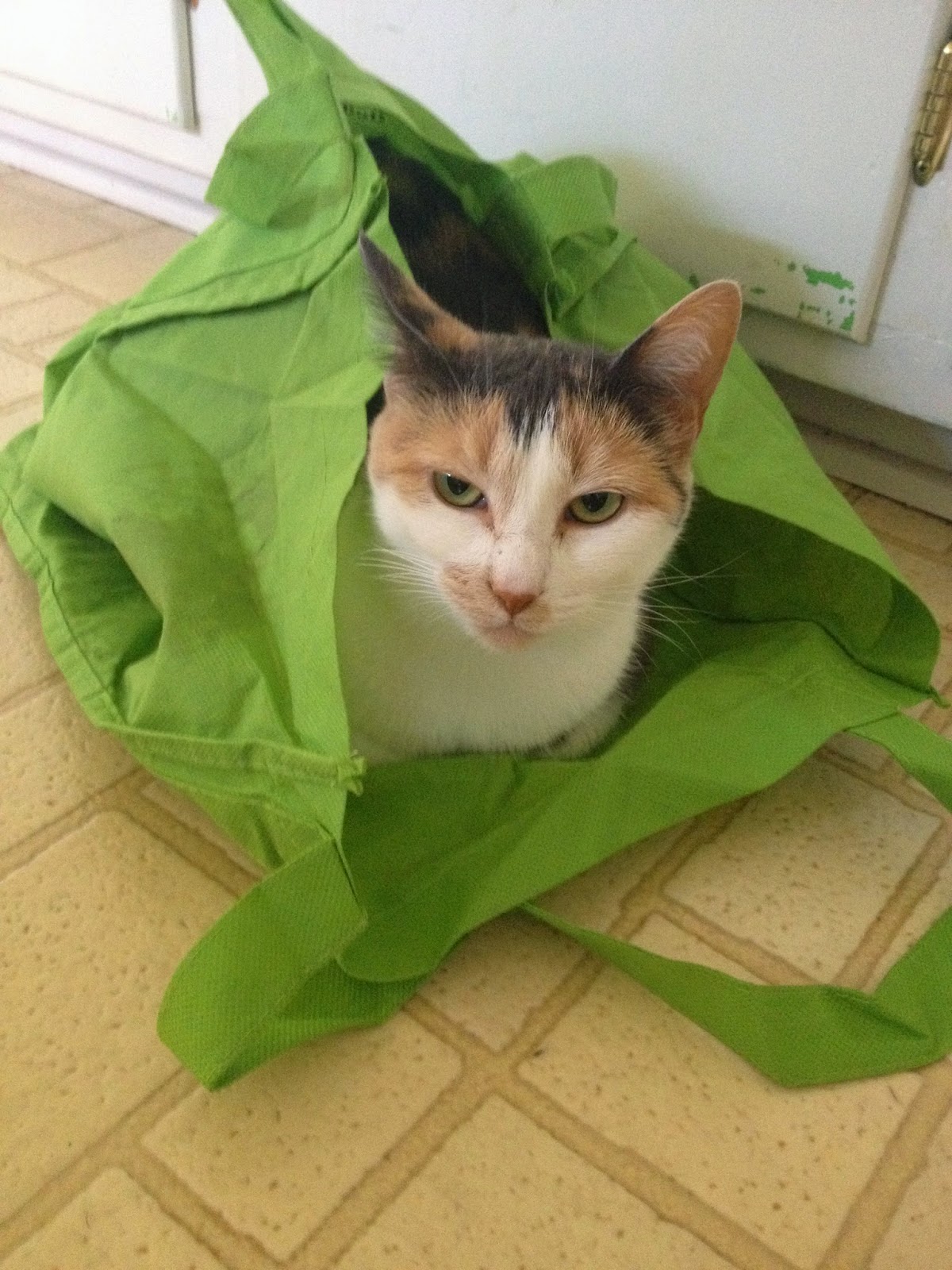 Meanwhile, back at home the cat stayed out on the porch for another day and night before we introduced her to Cari. Hmmm ... Cari wasn't so excited. The whole idea of sharing her space and her people got her a little tense.

In fact, Cari is quite the little six-pound bully. She kept stalking the cat and staring at her to make sure that it was all clear - Cari is the Queen Bee. After another day of the cat out on the porch, I let her inside. We only had one cat-fight, then it was all about posturing. And Cari stalking the cat.

For the most part, the cat (now starting to be called Emma - uh oh, once you get a name, you get the cat) either ignores Cari or acknowledges that Cari is the Alpha cat. Emma is such a mush, she'll just lay down, almost melt into the floor she is so relaxed, and let Cari just go on staring. 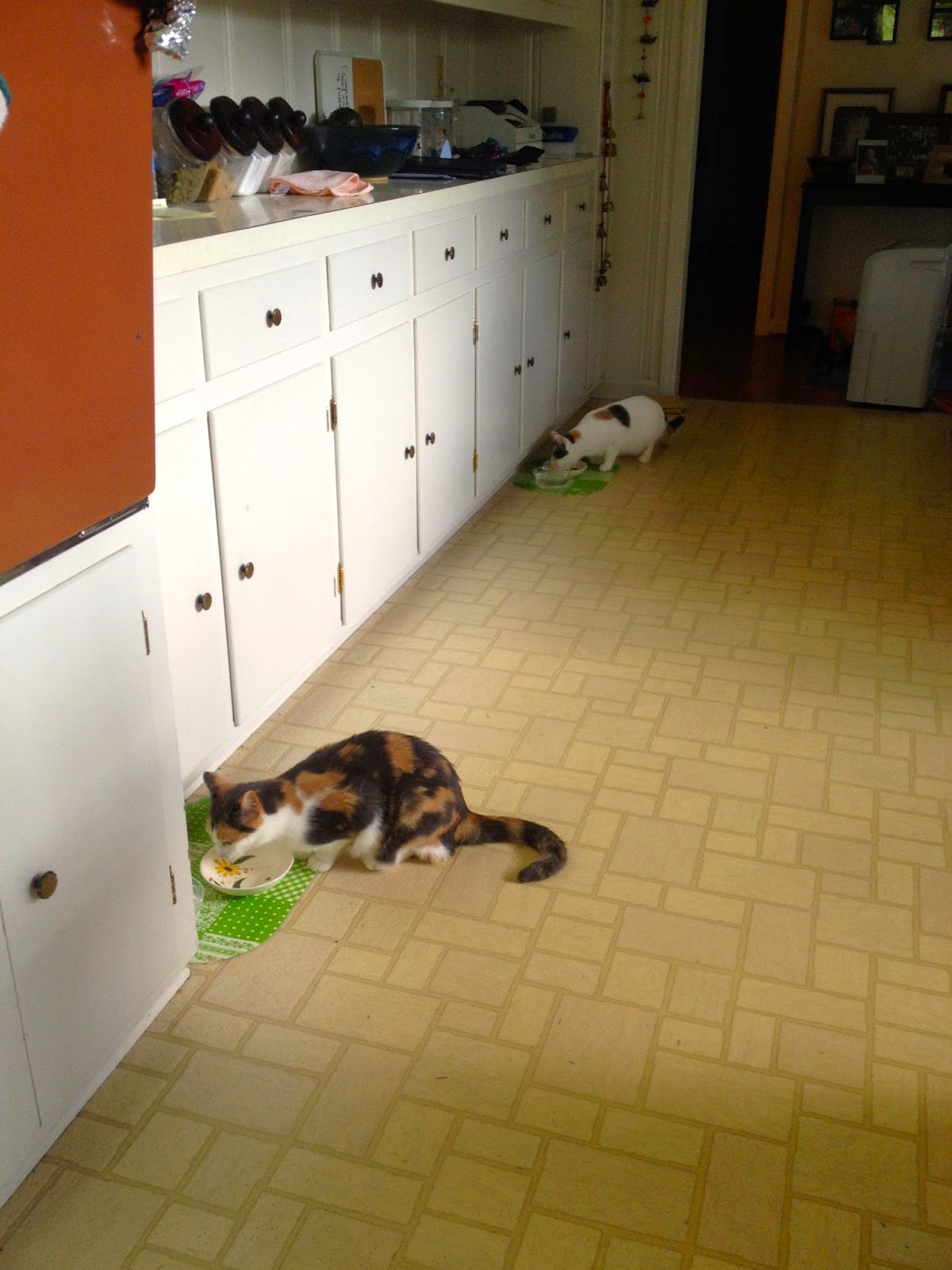 It's been almost a month now, and I think Emma is here to stay. Cari is starting to go back to her cute self and Emma is just a love. They just act like they are sisters.

Emma got a clean bill of health at another vet's appointment and started to get her shots. This week both Cari and Emma head to the vet to get their microchips (and a few more shots for Emma). We don't want to take any chances with our girls.  Would you believe that Emma was already spayed? One less thing to worry about.

It's sad to think that someone who loved her couldn't take care of her anymore. But we are happy that she found us.