Early Friday morning, the three older VurAllen girls, Auntie Alisa and Nicholas (a friend of Ilayda's from Civilian Air Patrol) all headed out to West Point the  U.S. Military Academy.

They were taking part in the annual Reception Day Rehearsal. Aong with 300 other volunteers, they were there for the practice session to get ready for the real arrival of new cadets. You can read more about it here: R-Day.

They were all assigned to a Company and Squadron, learned to salute and drill, how to answer questions (No, sir/ma'am/Sargent; Yes, sir/ma'am; I don't understand, sir/ma'am; and No excuse, sir/ma'am), and got to see the Sargent in the Red Sash. Whew.

Here are some pictures and insight from Aunt Alisa. 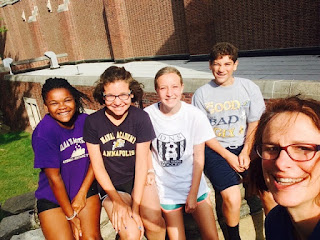 Here we are at 0800 yesterday at West Point, NY at the US Military Academy. Nazeriah, Kaija, Ilayda, and I, along with Nicolas, a squadron mate of Ilayda's from Civil Air Patrol, went to participate in the Reception Day Rehearsal.

We were volunteers, along with 300 others, for the practice session before the real deal in the next few days. We had an awesome time together before, during and after. The kids enjoyed talking about their favorite books, their honors classes, and career aspirations. We all had a really good time and learned a lot. 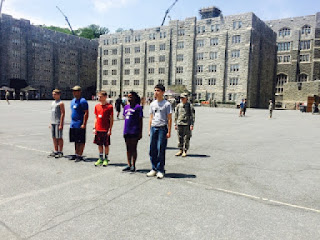 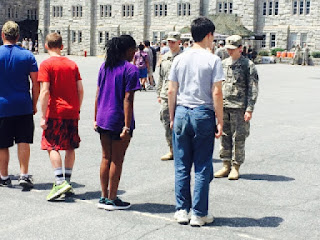 This is Nazeriah during her drill instruction. She had it totally down pat and was waaaay better than her flight mates. I was totally impressed, watching her from across the way. I guess Melissa must be marching her all over because this seemed pretty easy for her. 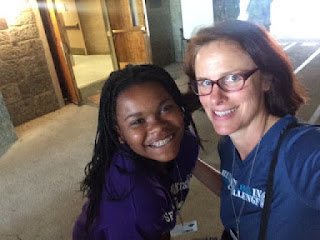 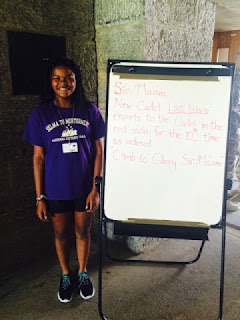 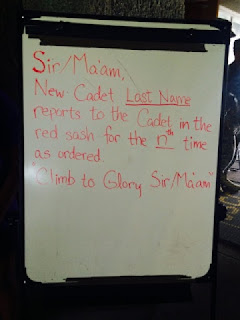 Nazeriah and I were both assigned to G-Company yesterday, although in different squadrons. Our company motto was "Climb to Glory" and we had to greet fellow company members with that motto.

The salute to the Cadet in the Red Sash was the last thing we did for R-day and it was really stressful and scary. Nazeriah said she looked around and saw all older boys going before her and she though, "I am smaller, younger and I'm a girl. Ok, Nazeriah," she told herself, " don't worry. You've got this." and she went and did it and only needed two tries to get it straight. Yeah! 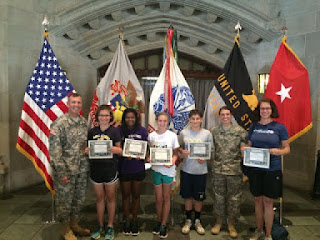 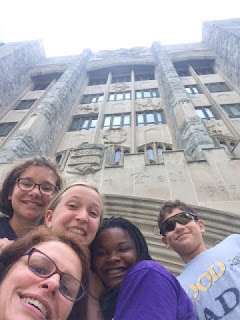 After the rehearsal yesterday we had lunch at Washington Hall with the cadets it was really neat to get to know them a little, especially after having the March us around, yell at us, and call us "New Cadet" all day. The lunch was overseen and attended by Brigadier General Jon Thompson, the Commandant of Cadets at USMA. When Ilayda and I went to the Camporee in May our squadron memorized a bunch of West Point facts beforehand so we could compete in some of the activities. Among the facts were some about who the Commandant of Cadets is and things about him. We referred to him as "JT" in short-hand to help with the memorization. It was a pretty big deal for us to meet him and have the chance to chat with him. He teased Ilayda and Nicholas about their Navy shirts, and told them a joke about how Army is Better. It was slightly off color and the kids didn't get it and I didn't even remember it after all the excitement passed. Awesome stuff.

We also met the Cadet Comander of Beast (new cadet summer), who is the female soccer team coach. She was really cool and chatted with Nazeriah, Kaija and Ilayda about soccer. At lunch Nazeriah and I sat with a women's soccer team member (who is studying middle eastern studies and physics, and is a cadet in the red sash.) we really liked the cadets at our table and they were all friendly and interesting. I taught them some German and Turkish phrases (they asked me to) and they were really smart - it showed.

The thing I liked best about the day was asking questions. The point of rehearsal day is for the Cadets to become prepared for the real thing. So we volunteers were pretending to be new cadets. Our four available Answers to questions were: yes ma'am/sir, no ma'am/sir, no excuses ma'am /sir, ma'am/sir I don't understand. Ok, working within that I told them every time I didn't understand an order or explanation they had given me as a new cadet. I know my questions were helpful because they'd stop, back up, and redo the whole thing incorporating clarification To my question. Haha, a weird way for me to do training compared to my usual approach, but it worked.

I also really enjoyed being taught to drill. The cadet teaching me had never taught drill before and he had terrible problems with right and left, and usually said the opposite of what he was doing and wanting us to do. I did what he said not what he wanted us to do, and in so doing he had the chance to get it straight. It was kind of funny but mostly just cool to watch him figure it out and straighten it out.

The kids all enjoyed it immensely and all in all It was a great day. They really like seeing the inside of West Point and learning what R-day is like (scary, intimidating and challenging. ) 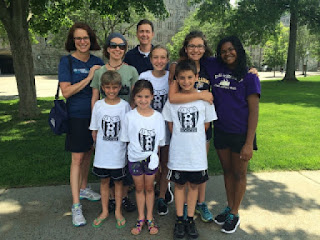 The funny thing is how timely this experience turned out to be. Just a few weeks ago Nazeriah accused me of running the house like the military. (Insert evil laughter here.)

I think she has a different opinion now.
Posted by Melissa M. at 7:30 AM