A little of what's been going on

Life has been exciting lately. Let's back track on a few of the bigger happenings.

First off - I'm all right. But the car is not. While waiting at a three-way stop, I had a woman slam into the back of the mini van. I swear she was going full speed. At least I was stopped, had my seatbelt on and have great headrests. Yikes. 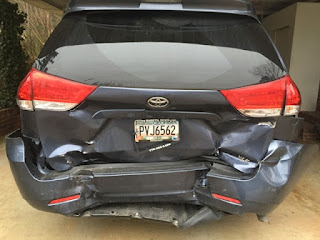 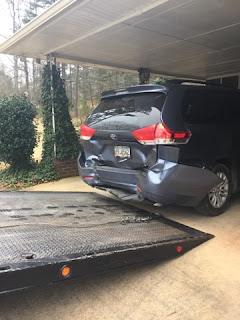 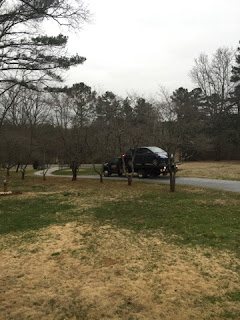 I was able to drive it home - but there it sat until the tow truck came on Monday. The back was so squished in that I couldn't remove the blanket and grocery bags that were stored back there. I'm just thankful the car is so well made. And that I was the only one who was in the car at the time. However, I was just a tad emotional after it happened.

What is great is that we still have Big Grandma's BIG car - the Mercury. So while Courtney's car sat at the airport parking lot waiting for him to come home, I was still able to tool around. The girls didn't like it, tho. It's not their favorite to drive the "old persons car."

Courtney and I went to pick up the rental car today. Now I can pick up the girls from school in mini van style again.

This past weekend, I tried to lay low and take it easy. It seemed that instead of the golden touch I had the "let's break everything" touch. The dryer stopped working, my phone had issues, the cat peed somewhere where she shouldn't have, the toilet backed up, I could keep listing things but I'd rather not dwell anymore on them! The good stuff - Nazeriah had a soccer jamboree, the first of the middle school soccer season. Here team won all three games, even beating their main rival. Luckily it was also down the street from where we live. Then she was able to go over to a soccer friends house for the afternoon. Kaija, Chayton and I hung out at the house. I think I even took a nap. :)


Chayton kept himself busy reading and building. That day it was a couch fort. 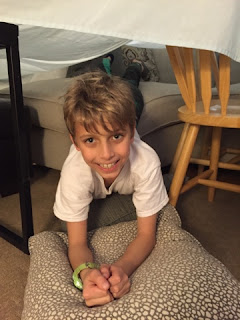 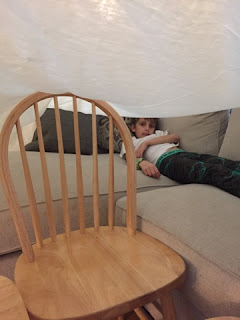 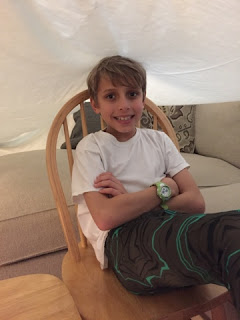 Complete with an entry way, emergency exit, dining area and sleeping area. I'm so happy he still enjoys doing things like this. Kaija finished up homework, did her extra chores and read/listened to homework. And the dryer was fixed!

Sunday was more rest time - but also chores. Chayton, Kaija and I washed Blue for the first time. It wasn't as bad as I thought it would be! By Monday, I think everything in my emotional state had calmed back down to normal. Which is good - I really don't need a lot of drama in my life.
The weekend before, the girls were off at a friend's house. Chayton took full advantage of all the attention. We were able to catch a HomeDepot craft day, lunch out at Doug's Downtown Deli and he still had time to construct his outdoor living room in our magnolia trees. Too bad there was poison oak around there somewhere. He's still dealing with the after affects of that run in. 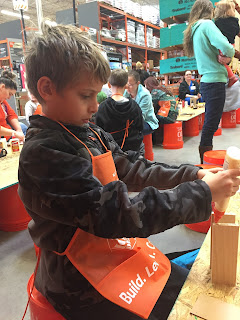 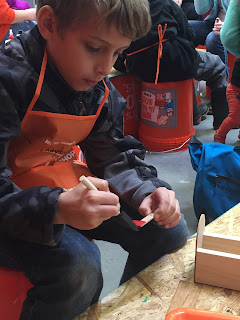 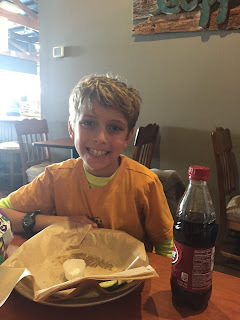 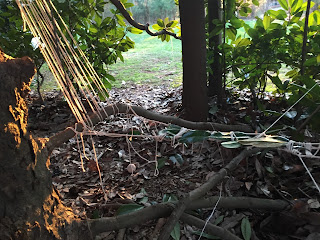 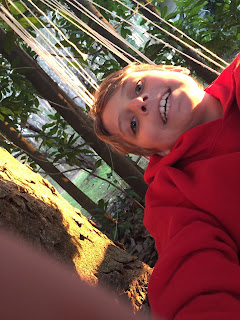 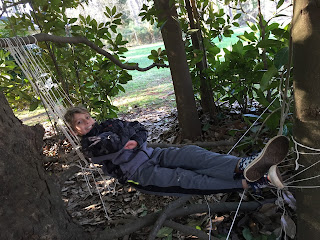 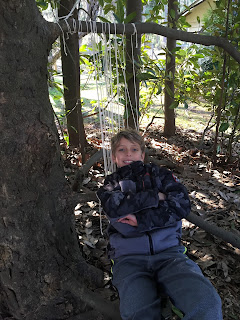 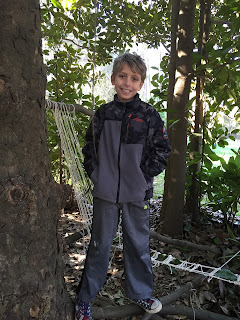 Before that, I was able to spend a little bit of time in Florida - all by myself! Courtney stayed home with the kids and I stayed with the Tantes (aka Jeri and Sabine). They treated me so well! Coffee and green smoothies every day, plus lots of fun activities like the opening of the Dali exhibit, bike rides on the Pinelles Trail and a walk on the beach. Not to mention all the good advice and time spent driving around. 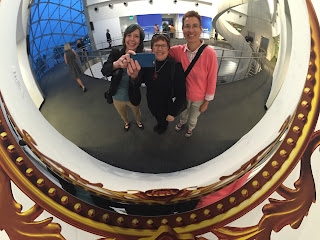 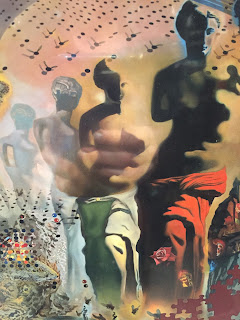 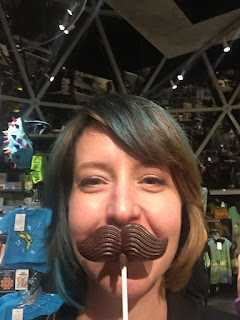 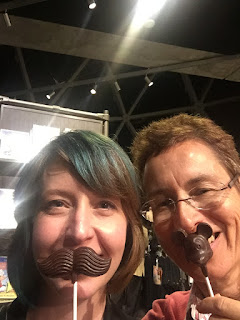 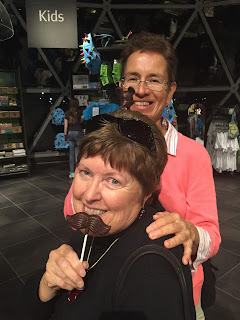 Here's some of the things that happened at home while I was gone. Blue hiding under Courtney's legs at dog training. 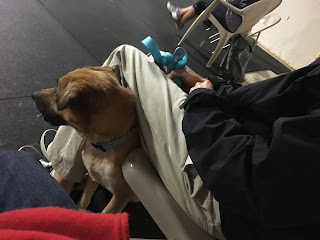 Chayton teaching Blue how to catch a frisbee. 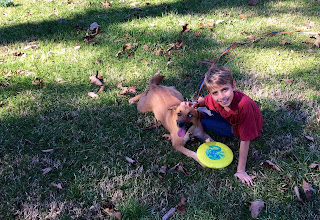 And the weather was so nice at home they ate dinner outside. Yum. 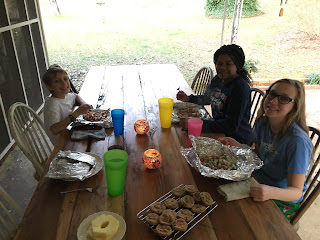 I don't get so many photos of the girls anymore - even tho they always seem to be taking selfies. Here's a few they actually sent me. (And one of Chayton watching a YouTube video on how to create something - his favorite is The King of Random.) Enjoy! 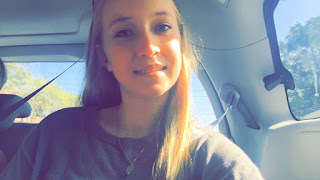 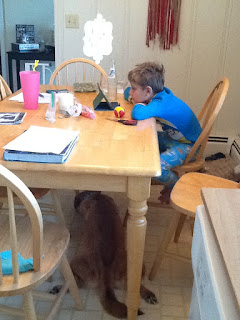 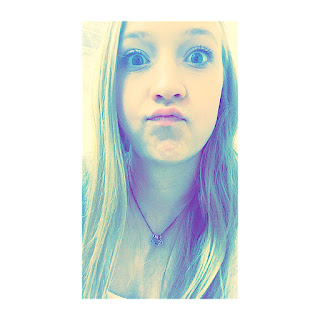 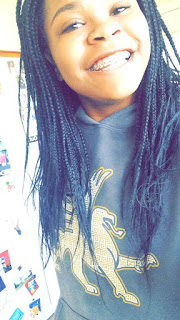 {Be on the lookout, the next post will catch up on Nazeriah's b'day and our trip to Nashville.}